Home
Vocabulary
Shapes and Their Names, Definition and Examples with Pictures
Prev Article Next Article

Shapes and Their Names, Definition and Examples with Pictures 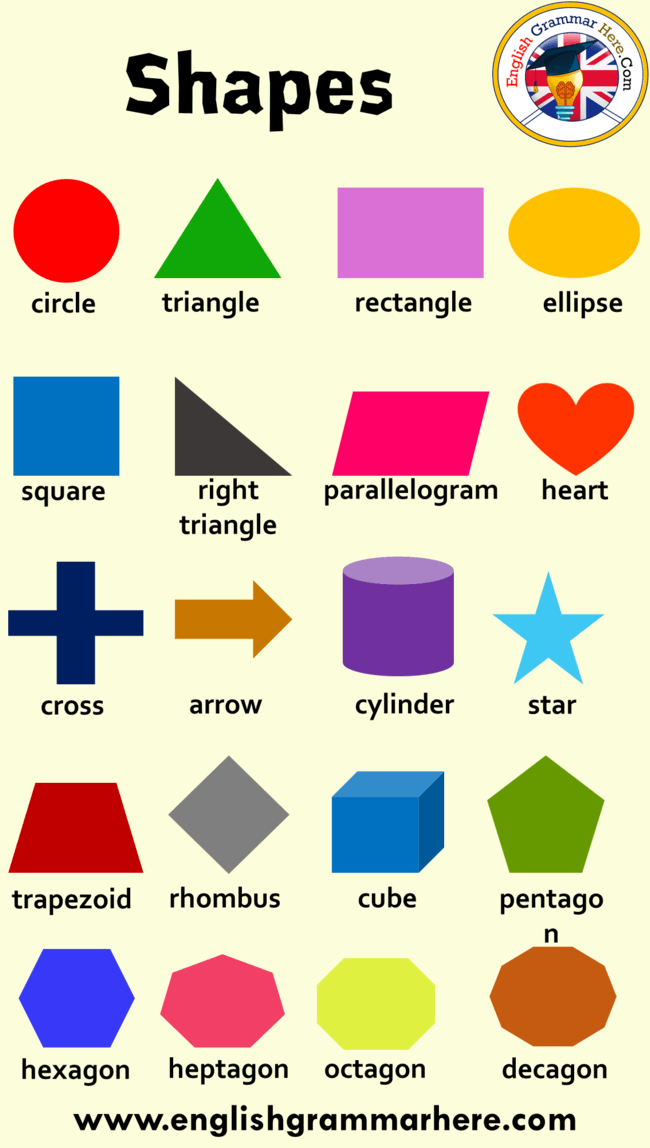 It is very important how there is a similarity or difference between the shapes of the corner zone and the basket backboard. While there is an opening in the shape of the corner zone in football, the shape of the basketball backboard is completely closed. From here, it can be said that the shapes can be open or closed. We will cover the ‘shapes names’ in detail by giving example shapes to these situations below. Closed shapes created with straight and curved lines are geometric shapes.

Here are Lines Names in English


Some of the geometric shapes have special names. Triangle, square, rectangle and circle are the most well-known geometric shapes. Let’s take a closer look at the shapes names in English:

It is a geometric object whose all sides are a square area. The cube with all the same faces is a special prism. All edge lengths of the cube are equal. Each of the co-square regions here is one side of the cube. A cube has 12 sides, 8 corners and 6 surfaces. The cube shape can have many different expansions. There are 6 quadrangular regions in its expansion. The four different aspects of the cube are generally explained in the lectures.

It is a prism consisting of the upper and lower surfaces of the square areas and the sides of the rectangular areas. The shape of many milk and juice boxes around us is in square prism model. Navy blue colored edges are the height of the prism. The orange edges are the base edges of the prism. In prisms, heights are the edges that merge the upper and lower soles with their exact meaning. A square prism has 12 sides, 8 corners and 6 surfaces.

It is a prism whose upper and lower surfaces consist of co-triangular regions and its side faces are rectangular regions. Unlike other prisms, the triangular prism has 6 corners, 9 divisions and 5 surfaces.

It is a geometric object whose top and bottom surfaces are equidistant and the sides are curved. The opening of the cylinder has two identical circles and a rectangular region. The roller has no separate and corner.

It is a geometric object that has no opening, separation and corner. Ball and ball are spherical models. There is a circle slice and a circle at the opening of the cone.

Cone has no corner and detail. New year hats are cone model.

It is a triangle with side lengths equal. Their internal angles are also 60 degrees each. The lowered height is also the bisector, the edge of the corner and the edge center post.

A rhombus in geometry is a square of four sides of equal length. The rhombus tile seen on playing cards, the pills of this shape are lozenges, the baseball playing field with this shape is called diamonds. Each rhombus is a parallel edge and the right angle is a square.

Closed shapes formed by segments of lines that combine any three non-linear infinite points two by two into the plane. Polygons created by joining infinite points are called ngenes. It is called a triangle, a rectangle. Polygons have as many corners as the number of edges.

In the schools, many questions are not asked about geometry subjects such as trapezoid, trapezoid area and perimeter, trapezoid and trapezoid. In general, we already know that there are a small number of questions from all subjects of the geometry lesson. It is not possible to predict which title will be raised from the geometry issues. Therefore, we need to know trapezoid and related subheadings.

An oval is a closed curve in a plane that is very similar to the outline of an egg. The term is not very specific, but in some regions a more precise definition is given, which may include one or two axes of symmetry. In common English, the term is used in a broader sense. For example, it can be used like any shape that reminds an egg.

The parallelogram is a quadrilateral rectangular with equal sides and a total of 360 degrees. Their opposite edges are parallel and their length is equal.