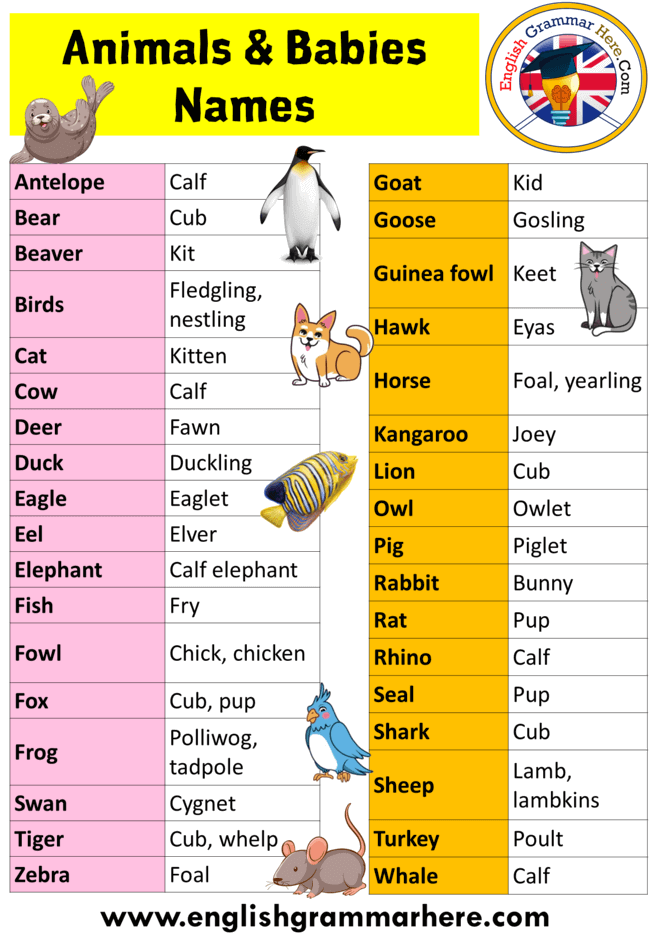 If you are interested in the animal world and therefore want to learn new words to strengthen your language skills in this field, you are definitely in the right place. When talking about animals, it is very important to know how these animals offspring names are shaped and used. In this way, you can express yourself much more easily in the presentations you make or in the various slides you prepare. Baby Animal Names example sentences can be extremely useful for you if you want to be able to easily understand the documentaries you watch in English subtitles. Let’s examine these words and sample sentences formed with these words together.

If you’re interested in the wild animal world, you must be wondering what name the offspring of crocodiles have. Hatchling is the name given to crocodile puppies.

The ancestors of Cria, which resembles camels in terms of structure, is defined as Alpaca. The sizes of these animals are generally smaller. Both wool, milk and meat of this animal can be extremely valuable.

Babies of the American bison are called Calf. Bisons are a type of animal that is evaluated in the wild animal class. These extremely large animals can become even more dangerous when they grow up. Calfs can often be described as babies of animal species called the American Bison and the European Bison.

The puppies of the animal called Anteater and known to very few people in the world are called Pup. Pup is an animal that feeds on ants and is often called a wild animal. This animal is an animal that belongs to the mammal family.

As you know, the offspring of people is actually called infant. But this is not only true for people. The babies of the animals called Baboon are also called infants. Did you know that these animals are considered in the primate category? In fact, infants are animals that are extremely intelligent and have large sharp teeth.

As you know, bears are animals found in almost every geography worldwide. The little cubs of the bears are called Cub. Cub are extremely small wild animals that are almost likened to cats or dogs. Bears are very sensitive to protect their cubs. Therefore, if you pose a danger when the bears have offspring, you may encounter extremely dangerous situations.

Now we will share a very nice animal name with you. The pups of butterflies are called Pupa. Pupa usually continues to develop in its own small nest, and after getting rid of the larvae state, it turns into a butterfly. During this process, the cocoon is completely closed. Therefore, pupae are usually animals that are difficult to observe.

The most common baby animals we encounter in everyday life are the kittens. You can often find the name kitten on pet sites. Kitten is a term generally used for cats between 0 and one year old. Therefore, it is important to know this word in your animal-food purchases.

Dogs are also animals that we often encounter in everyday life. Dogs’ puppies are also called pups. You can call all the puppies of dogs of different types as pups. Since dogs are mammals, they feed their pups with milk and continue to care for their puppies for a long time. Due to this feature, puppies cannot develop in a short time.

Have you ever thought about what we should name the ducks of the ducks we see in lakes or seas in everyday life? Duckling is the name given to the babies of the ducks. These ducks have a generally small body and swim around their mother. Ducks can enter extremely dangerous situations for their offspring and defend their ducks.

Coat you can see especially in mountainous areas are interesting animals. The cubs of these animals are called kid. We can say that these animals, which have a life span of 15 – 18 years, spend time with their mothers especially during infancy. Kid is an animal in the herbivore category.

Do you like rabbits? Especially the pups of the rabbits in the countryside are called Leveret. These rabbits may be brown or gray, unlike others. Therefore, it is very difficult to distinguish them from other animals. These animals, which are evaluated in the mammalian class, have a life span of up to 18 months. These animals are especially known for their rapid mobility.

The offspring of the bird called Jay are called Chick. In fact, the word Chick is used for the names of different kinds of birds. Therefore, you can come across different explanations about this subject in different sources.