Birds Name with Pictures and Details, Definition and Example Sentences 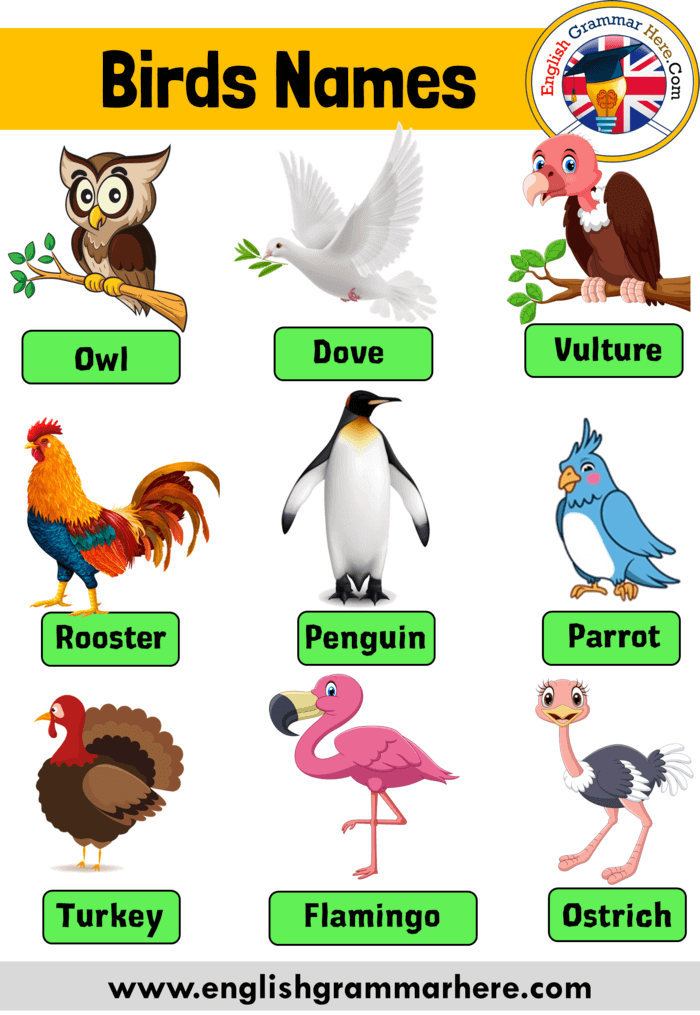 The bodies of birds, which are a species of animals, are covered with feathers, they are warm-blooded animals and reproduce with eggs. The plumage of the birds is light and strong, it also protects the birds from the cold and the birds comb their feathers by combing them. Birds are beaked, winged and vertebrate animals, but their beak has no teeth.

The most crowded bird species in the world are tetrapod vertebrates living with more than 8000 species. The first known bird species is Archeopteryx, which lived 150 million years ago. Today, there are around 10000 bird species including land and aquatic.


Most bird species can fly but there are also rare species that cannot fly. Birds have sharp eyes in order to fly comfortably, easily approach their prey and be protected from their enemies. For example, a bird species, the falcon, sees eight times clearer than the human eye. Some of the birds live as carnivores and some live as herbivores. One of the most important issues that birds help people is that birds are the enemy of insects.

It would be very difficult to cope with pests and plants if birds were not there. It is difficult to find food as the weather gets cold in the winter months, so the birds watch the hot areas during the winter months. So they look from north to south. With the onset of spring, they begin to migrate from south to north. Some of these bird species, which are abundant on earth, are given below with sample sentences:

Owls are animals with sharp eyes that appear at night.

This week, we went to the whole family picnic, the ducks were swimming in the water and making a sound like ‘Vak Vak’.

When I went to the zoo with my father last summer, I met a bird species with colorful big feathers, its name is peacock.

Eagles are carnivorous animals, while the lion is the king of the forests and the eagle is known as the king of birds.

Swans are the most elegant bird species I know, especially the white ones.

When we were young, we saw woodpeckers in a very funny cartoon that we watched with my brother.

Today is my birthday and my father bought me a yellow canary as a birthday present and I was very happy when I saw that bird.

Here are other birds names;